In view of the Government of Malta’s intention to implement a connection to the trans-European Natural Gas Network to deliver Natural Gas (NG) to the island, an open call for tenders was issued in 2012. The tender was awarded to Equinox Advisory Ltd. and a contract was signed in September 2013, triggering the preparation of the comprehensive feasibility study and cost-benefit analysis for connecting Malta to the European Gas Network.

The scope of the study was to determine the technical and financial viability of the gas connection project including identifying the high-level environmental impacts and risks and the legislative, regulatory and market organizational aspects pertaining to the project. The technical, economic and financial feasibility of the project was complemented by an options analysis, where a number of alternatives to the project were considered as part of the study. A financial and economic assessment was undertaken to determine the size of the pipeline taking into account the demand for gas for the inland market and future market from the maritime bunkering sector. The feasibility study looked into other externalities of the project such as security of supply, competitiveness, sustainability as well as identifying the aspects that make it a potential Project of Common Interest (PCI) as defined by the guidelines for trans-European energy infrastructure.

An application for EU funding under the Trans-European Energy Networks programme for the execution of this study was submitted in 2012. This proposal was successful and a 50% co-financed grant of a maximum amount € 126,000 was awarded in November 2013.

In the feasibility study five possible interconnection points were considered, these being: Pozzallo and Gela in Sicily, Otranto and Reggio in Southern Italy and Kalamata (Greece). Then for each route three scenarios were considered: the possibility of a pipeline interconnection, the berthing of a Floating Storage and Regasification Unit in the port and the option of having a Floating Storage Unit with a separate Regasification Unit on land with a dual flow pipeline. These were subsequently analysed within the subjects of project cost, environmental issues, routing difficulties, prerequisites/complexity and market attractiveness.

It resulted that the two most feasible scenarios were the following:

From the above two, the pipeline linking Malta to Gela was considered as the most favorable due to the existence of the required transmission infrastructure on the shoreline.

Preliminary results of the study indicated that, in Gela, the Transmission System Operator (SNAM Rete Gas) could guarantee a minimum pressure of 50barg at all times of year,under any conditions,. The indicative total offshore pipeline length established, was that of approximately 152.6 km while the maximum route depth of the pipeline was estimated at approximately 149 m b.s.l. Based on the results of the cost-benefit analysis, the preliminary hydraulic analysis and the future gas demand projections for a 40 year horizon, the required nominal diameter of the pipeline resulted to be 22 inches. In addition, it was calculated that no pressure facilities for the gas (i.e. compressor station) will be required at the Gela site in order to achieve the desirable pressure (35barg) at the Delimara Power Station. 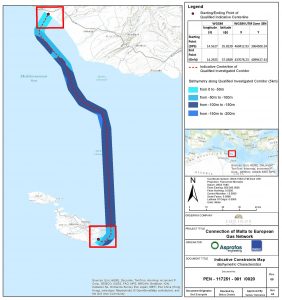 The overall conclusion of the study is that a 22” pipeline connecting Malta to Gela in Sicily would be the optimal solution to end Malta’s energy isolation from the European gas network primarily for gas importation from Italy to Malta. Potentially  following the completion of this first phase of the project,  a second future phase can be planned allowing for potential bi-directional flow of gas through the pipeline by installing a Floating LNG Storage and Re-Gasification Unit (FSRU) located approximately 12km offshore from Delimara intended to supply both Malta’s future gas demands and allow for the possibility of export of natural gas to Italy and thus provide an alternative source of natural gas to the European Gas Network.  This is however subject to further in-depth analysis and market development.

The Feasibility Study also concluded that the project is expected to contribute to a number of priorities associated with the implementation of a PCI. These include:

The results from this feasibility study provided support for the preparation of future studies and applications to the European Commission for financial assistance from the ‘Connecting Europe Facility’ funding instrument under the Commission’s energy infrastructure package or under any other EU funding instrument.  In fact, the main conclusions from the study were critical in the preparation of the CEF application for the route identification and basic design study which was submitted by the Ministry for Energy and Health in April 2015.